The serendipitous re-discovery, in April of 2005, of the historic post World War II citizen’s grass roots movement to supplement the Marshall Plan, « Operation Democracy » ; which spawned the concept of « Sister-Cities » ; forged by citizens of Locust Valley, New-York and Sainte-Mère-Eglise, Normandy ; has resurrected their necessary bonds of lasting friendship.
As the founder of the AVA, Mme. Simone RENAUD’s voice still rings loud and clear, echoing the mission she installed in her sons: “Never Forget.” Following her lead and the imperative spoken by every official who has addressed the returning Veterans during the annual ceremonies during D-Day week that “we must find ways to pass down the lessons of this history to the next generation”; Operation Democracy, along with the AVA, intends to do just that.
Mme RENAUD inspires us as she demonstrated how one person’s actions matter. She taught us that in times of crisis; Military intervention may be necessary but lasting peace is created through personal relationship. We are, each, important ambassadors and diplomats for our countries and our civilization.
As we approach the 70th Anniversary of the D-DAY liberation of Normandy, and ever after, Operation Democracy will work together with the AVA in many efforts to honor the sacrifices and legacy of our Veterans.
We ask that the citizens of our two small villages discover these home grown initiatives that have had global impact, by exploring each website. We encourage all to participate in events and to feel free to gratitude “for those who have given so much of themselves so that freedom continues to remain a privilege for us.” 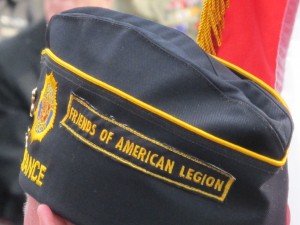 AVA and The American Legion

Amis des Veterans Americains and The American Legion have revived a time-honored bond in recent years. It is an alliance forged by honor and respects both organizations share for those who fought in the Normandy invasion of 1944 that liberated western Europe and ultimately defeated Nazi Germany in World War II.
The earliest photographs of events commemorating the invasion include images of American Legion members and leaders, in their familiar caps, among the liberated French citizens, veterans and dignitaries of the Allied nations. Some of those Legionnaires were former soldiers and sailors who fought  on D-Day and the pivotal weeks that followed. Early commemorations in France were also attended by U.S. veterans of World War I, whose comrades formed The American Legion in Paris March 15-17, 1919. As the years and decades passed, and as The American Legion grew to become the largest veterans service organization in the United States, Legionnaires have flowed in and out of Normandy to honor the fallen, lay wreaths at cemeteries and monuments, participate in parades and other observances, and to keep alive an eternal flame of friendship. In recent years, American Legion National Commanders have made Normandy an essential stop in their official visits of Europe. Some of those National Commanders have been named honorary members of the AVA and have played active roles in observances at Ste. Mere-Eglise, La Fiere Bridge, Utah Beach, Pointe du Hoc, the Normandy American Cemetery and other historic locations. American Legion members from Europe also commonly attend ceremonies around the D-Day anniversary and serve as color guards for special events. American Legion Magazine Editor Jeff Stoffer has embraced this renewed alliance between the organizations, having first written about Ste. Mere-Eglise in 2006, in an article titled "Where Heroes Fell." He later worked with documentary filmmaker Doug Stebleton to write the screenplay for "Mother of Normandy," which tells the story of Simone Renaud of Ste. Mere-Eglise, who formed the AVA and spent 44 years of her life dedicated to the friendship between America and liberated France. Stoffer also wrote a book about the life of Simone Renaud and the culture of gratefulness that exists today, as strong as ever, between the nations. A member of the AVA, Stoffer also arranges annual American Legion visits to Normandy and works closely with officials in France to ensure that the bond is never broken and that the sacrifices are not forgotten.

It is a great honor for us to get such an exposure in the American media. 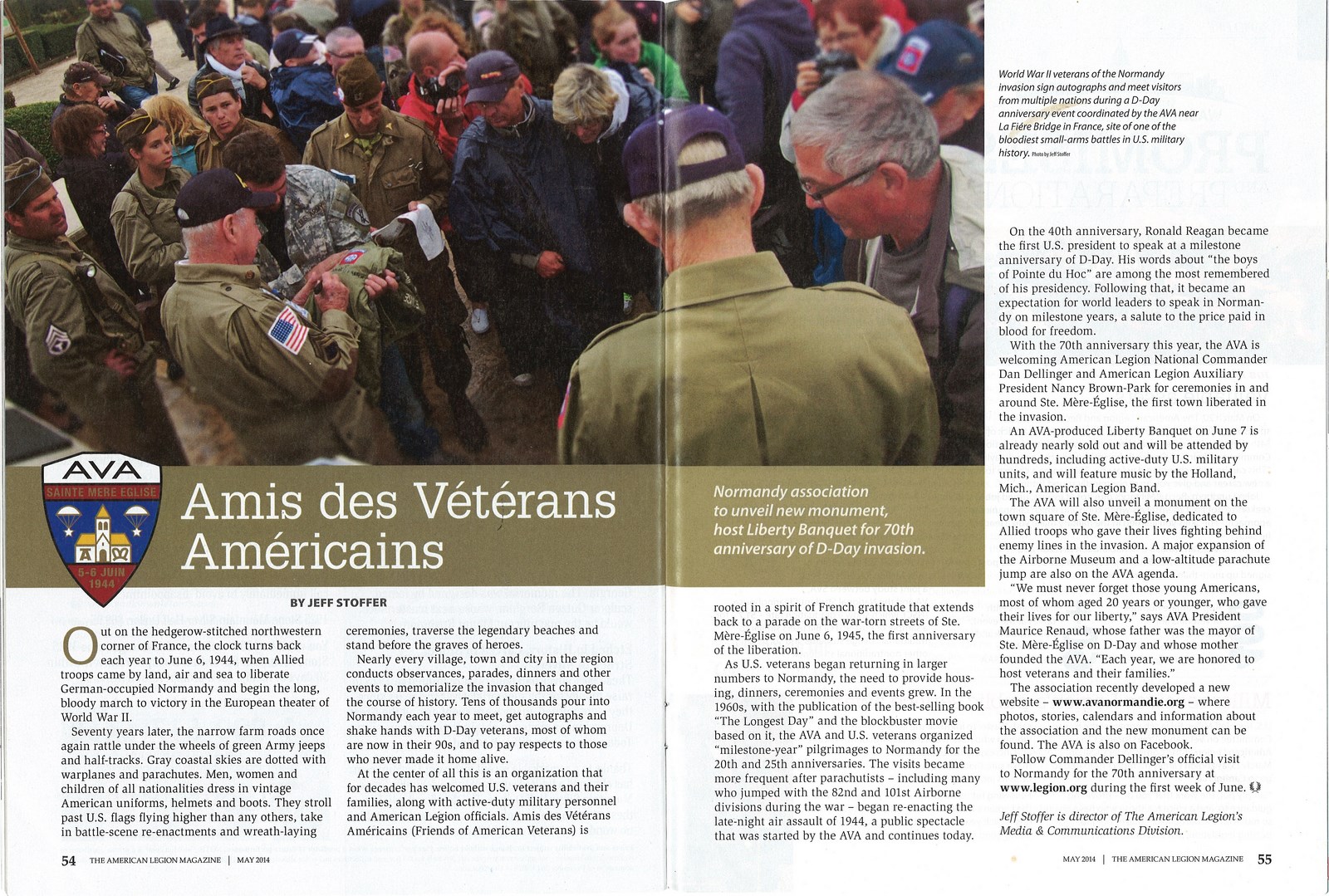 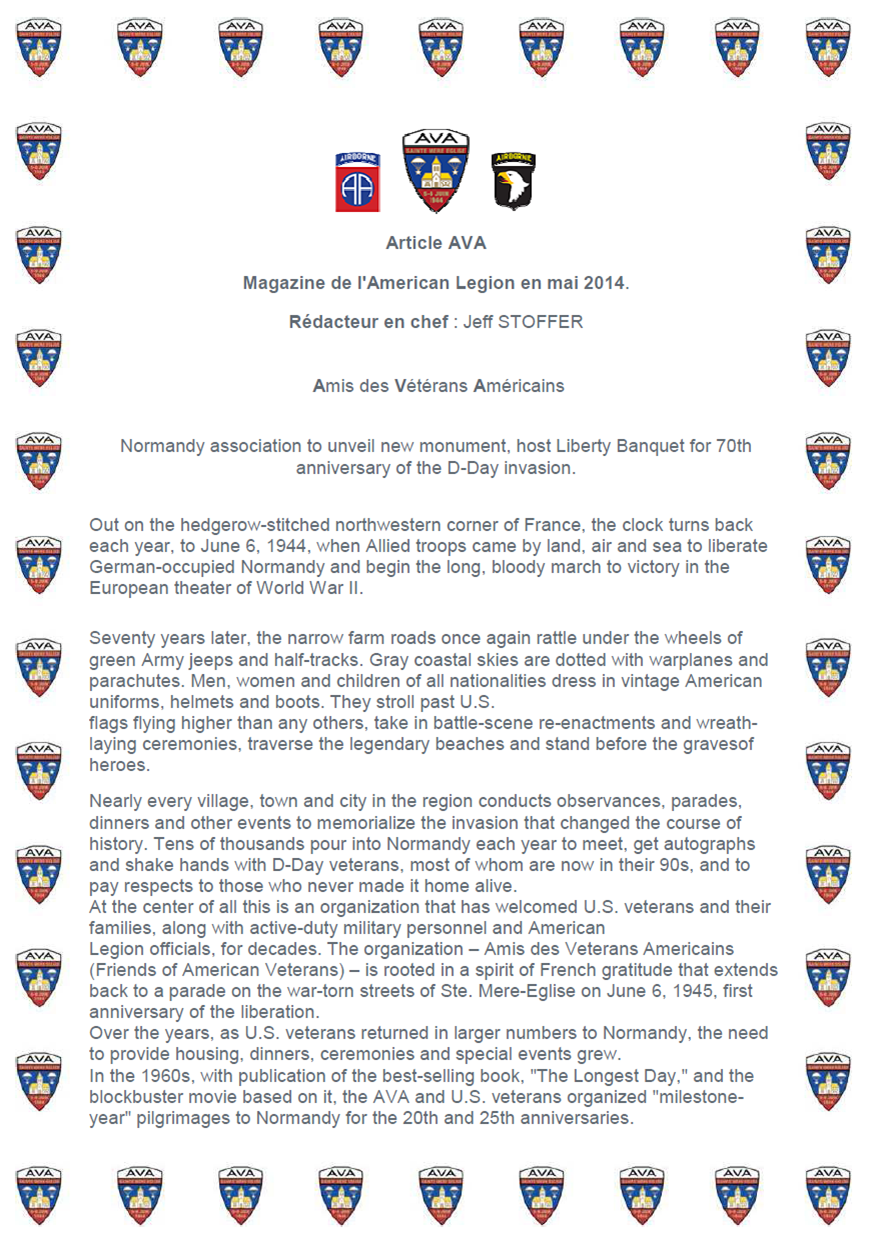 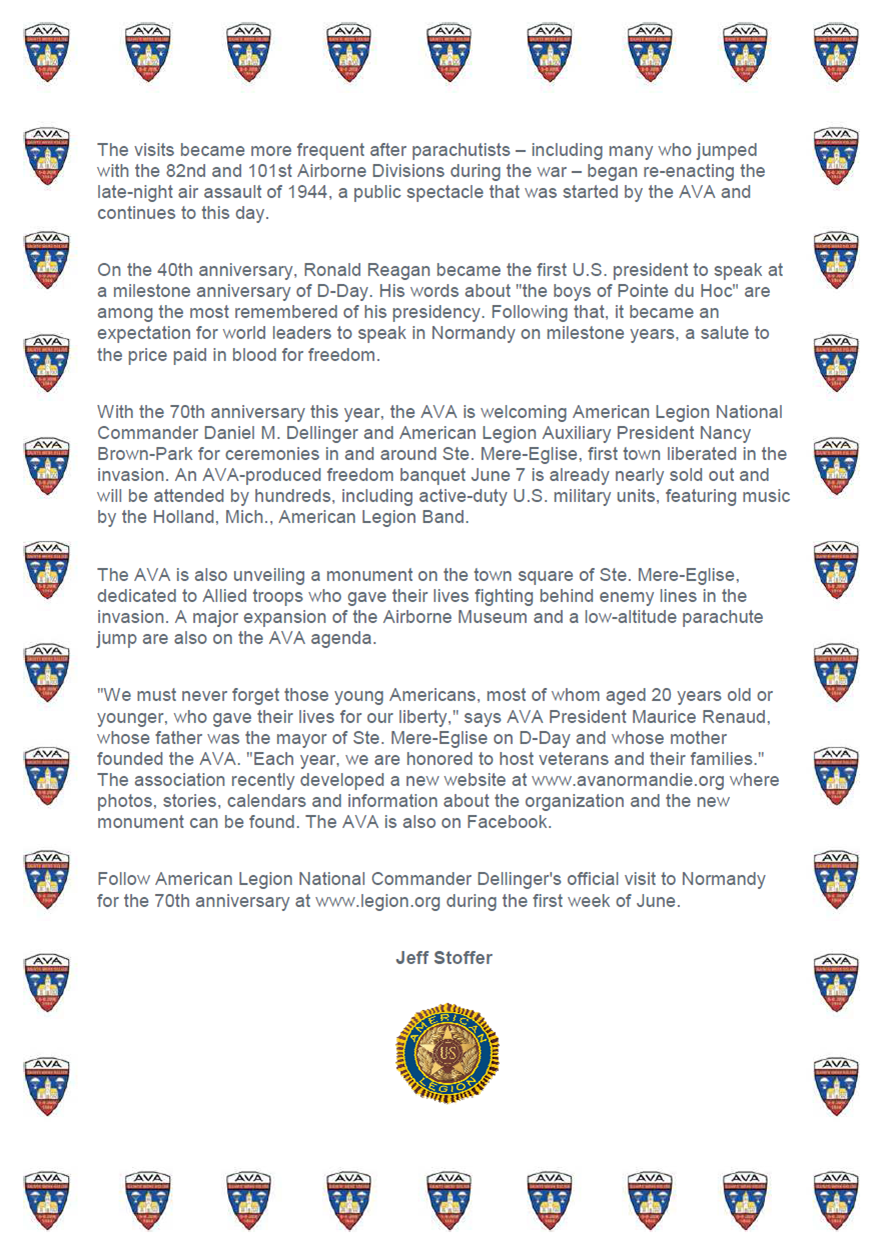