"Several days ago, ex 505 PIR medic Pinky Pinkston died. I knew him reasonably well from his trips to Normandy and he was truly great and the stuff that made us and the 505 what we were and are today.

He fought with the 505 PIR throughout the war and was a continuing comfort to his men in the worst of circumstances. At La Fiere bridge, Normandy 6-9 June, Pinky ran a clearing station less than 20 meters from the front. It was in the crawl space under the Leroux house with less than 3 feet of clearance. Pinky handled more than a 100 men there. Even though he was C/1-505, he took charge of the space and with other medics, provided the initial triage and clearing of the wounded from virtually all numbered elements of the Division that fought there. Often, the 200 meter trip from the shelter of the house to the Division medical location in an open field to the rear was too hot and Pinky had to be a doctor as well as a medic to sustain life. He often stated it was a great personal regret he was not always successful.

On the 40th anniversary with the return of the 82d to Normandy, the owner of the house showed it to my troops as he had preserved it from that 4 day period. In the obscure dirt and timbers of that cramped but then protective space, one could see the detritus of Pinky and others work in that desperate moment. Still preserved and untouched were wall to wall plasma bottles, hoses, syringes, dried bandages and torn pieces of clothing and boots. I asked the medics in our formation to go in the small crawl space door and examine their work station. They came back speechless and clearly moved as did everyone else who followed in years since.

He ministered to his wounded brothers of the 505 throughout the war including Market-Garden, the Bulge, the breakout and assisted in servicing one of the first concentration camps liberated. He was decorated multiple times to include three Purple Hearts and told me several times-"All I wanted to do was serve soldiers." Something he did to a very high degree. 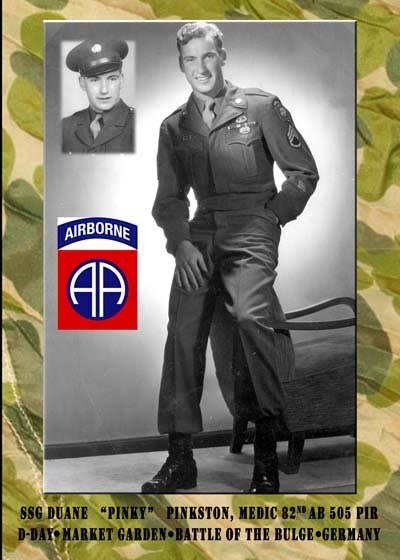 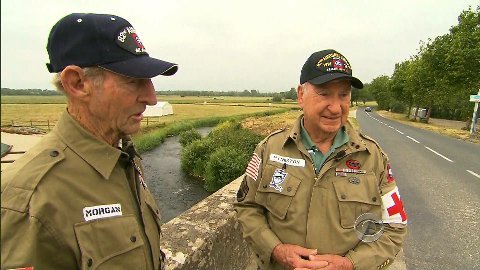 "Each year since I have had the privilege of returning during D-Day ceremonies…..Pinky was a constant source of inspiration with his strength and sweetness.  Behind his bright, kind eyes; one was always aware that those eyes had seen great sadness and yet prevailed with his welcoming smile, cheerfulness and strong handshake. He was adorable in the full sense of the word.  There will be an empty space in Sainte Mere Eglise without Pinky there.
Another hero leaves us.
Thank you always Pinky."
Cathy Cyphers Soref
[Show slideshow]