A Word from the President

The Friends of American Veterans association is proud to have largely contributed throughout the years in recognizing and honoring the memory of American soldiers. Following in the path blazed by Madame Simone RENAUD, 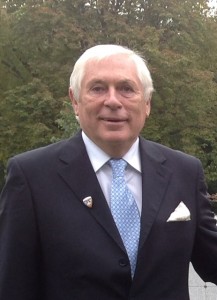 our founder, the association works each year to express their gratitude, admiration and friendship. We must never forget those young Americans, most of whom aged 20 years old or younger, who gave their lives for our liberty. Each year, we are honored to host veterans and their families. We participate actively in the commemoration ceremonies at Sainte-Mère-Eglise and the region. Having created the Memorial Site at La Fière and its many monuments, we will erect a major monument in honor of all the allied parachutists of June 1944 in 2014. We also organize the Liberty Banquet at Sainte-Mère-Eglise where military and civilians reunite for a French-American celebration of friendship. We are pleased with our excellent relationships with the association Operation Democracy of Locust Valley, NY and with the American Legion in Indianapolis, IN. Our members come not only from Sainte-Mère-Eglise and its surrounding area but also throughout France, UK, Belgium and the United States. I would like to warmly thank the Board of Directors and all the volunteers whose help is integral to our success. Finally, I would equally like to pay tribute to my predecessors, Mr. Roger COUEFFIN and Mme Ghyslene LEBARBENCHON who greatly contributed their time and energy into the continued achievement of our association.