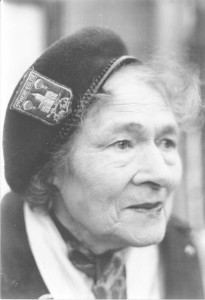 The small town of Sainte-Mère-Eglise, and also the county seat, will be chosen by the General Staff of the 82nd Airborne Division as the heart of the drop-zone.  The town Mayor is Alexandre RENAUD, a World War I veteran and pharmacist by trade and thus, one of the few who speaks English.  This is also the case of his wife, Simone, who will play a major role in the relations with the American soldiers, eventually earning her the title of “The Mother of Normandy”.

Sainte-Mère-Eglise will be the first town liberated by the 3rd Battalion of the 505 PIR of the 82nd Airborne and in the early morning of June 6th, the Stars and Stripes will fly over its town hall.  Luckily, the fighting in the village and its surroundings were short-lived and by the 7th of June, Sainte-Mère-Eglise is out of reach of the German artillery.  The neighboring villages of Carentan, Montebourg and Picauville won’t be liberated until several days later.  This explains why Sainte-Mère-Eglise became a behind the lines base for the American troops as well as the sight for the burial of the American soldiers killed in action during the violent fighting while liberating the surrounding towns.

The 3 provisional cemeteries in Sainte-Mère-Eglise and Blosville created by the American Army contain over 13,000 graves of American soldiers, victims of the fight for freedom on Nomandy soil.  At a time when transatlantic travel was long and expensive, few Americans were able to make the trip.  Madame Renaud, who speaks and writes English fluently, devotes herself to responding to families who are hoping for information about the grave of their beloved son or husband.  With her husband and children at her side, Mme RENAUD will continue to maintain these relationships throughout her life.  And the Renaud Pharmacy becomes a point of passage by veterans and their families.

As early as June 1945, Mayor Alexandre RENAUD organizes a commemorative event to celebrate our friendship with the Americans and to show them our admiration and gratitude.  The Americans return to Sainte-Mere-Eglise and alongside the local authorities commemorate the liberation of the town.  In the years that follow, the veterans return in large numbers to individually visit the sites of their respective combats, as was the case with Generals RIDGEWAY, GAVIN and BRADLEY and culminating with the visit of former President (General) EISENHOWER who would return to visit with Simone RENAUD in 1963.  Mme RENAUD along with other devotees will consecrate heart and soul for the next 25 years.

Sainte Mere Eglise was already preparing festivities for the 20th Anniversary in 1964.  Up to the challenge, Mme RENAUD imagined creating an association of volunteers who would host the returning veterans.  She will call it “les Amis des Vétérans Américains”, or “Friends of American Veterans”.  The AVA will be the first of its kind in Normandy as well as in France.  However, it isn’t until 1972 that it will be officially formed as an association.

Then arrives the 25th Anniversary in 1969.  A group of 250 veterans, organized by Don Lassen, founder and editor of the veteran parachutist’s magazine, “Static Line”, veteran O.B. Hill and the C-47 Club, a veteran paratrooper association, announces its plans to come.   This will be a tremendous task as the veterans must be lodged in homes of local families as there is a lack of hotels in the area.  Mme RENAUD, working with the French rail system, SNCF, will organize a special train that will bring the group from Paris to Chef-du-Pont at no cost to the veterans.  Maurice RENAUD, one of Mme RENAUD’s 3 sons who was currently working in Texas will assure the liaison between Don Lassen and the AVA.

In the 1970s, the AVA association will organize 2 trips to the USA.  The group will be royally hosted by American veterans and their families.  Mme RENAUD and the AVAs will be received by Senator KENNEDY in his office in Washington, DC.

The newly created association had for its mission to promote the welcome and reception of visiting American veterans wanting to rediscover the sites where they had once fought in 1944, whether individually or in group.  Other significant veteran visits were:

Other large groups would come in the following years, notably in 1994 and in 2004.  It should be noted the important role that many veterans played in the commemoration events of June 1944, such veterans as Don LASSEN, Andy KILCULLEN, Bill TUCKER, Bob MURPHY, Bob PIPER and O.B. HILL to name a few.

The association grows and expands to include members outside of Sainte-Mere-Eglise. During this time, Gerard BOSVY, Paul GROULT, Mme ROALES, Roger COUEFFIN devote themselves to the success of the association.  They realize several important projects along with American veterans such as the inauguration of the commemorative stained glass window in Sainte-Mere-Eglise’s church and the statue of Iron Mike at La Fiere.  The AVA association creates the Memorial site of La Fiere as well as the many commemorative plaques found there honoring the American parachutist regiments.

The association, moreover, by the framework of its design, participated in many actions and most notably:
–    Hosting American astronauts, a visit initiated by Mr. ROULLAND, an important member of the association who also developed many of the local events such as the public banquets, commemorative ceremonies among others.
–    Organizing trips to the US where they would be meet veterans and other active military on several occasions, notably in 1974 in which the AVA delegation will meet Senator Ted Kennedy.

In 1976, the different English, Dutch and French chapters of the C-47 Club will participle in the ceremonies organized at Fort Bragg for the reactivation of the 505 Parachute Infantry Regiment.

In 1984, working to find a common structure that would permit the eventual twinning of the 82nd Airborne Division and the city of Fayetteville.

In 2004, a trip to strengthen the relationship with the US Army and the US Air Force.  The AVA group would be received at Fort Dix, Fort Bragg and the Dobbins Air Force Base.

–    Relationship with the US Army :
1984, an important date in which the American Airborne troops made a commemorative jump at the fields of La Londe in Sainte-Mère-Eglise.  This jump was initiated by veteran Bob MURPHY, Col. Keith NIGHTINGALE, Col. David MCNEIL and French paratrooper Yves TARIEL.  This parachute jump opened the doors for an important relationship with the American Army which would put into place this annual event starting in 1988 with a brief interruption in 1991 and 1992.  With this in mind, we should honor the memory of Colonel JOHNSON, Military Attaché to the US Embassy in Paris for 10 years and honorary citizen of Sainte-Mère-Eglise, and to cite Colonel NIGHTINGALE, by our side since the beginning of the military jumps, honorary citizen of Sainte-Mère-Eglise and an honorary member of AVA, as well as Colonel MCNEIL, also present since 1984 and Colonel LETTRE, member since 1989.

–    Sister City with Gettysburg:  This little town in Pennsylvania is a sacred historical site since its infamous battle in 1863 between the Confederate and Union soldiers.  American children know, by heart, the famous speech given by President Lincoln at the inauguration of this national cemetery.  It’s Mr. D’AIGNEAUX who will lay the groundwork to establish a permanent relationship between this internationally known town and Sainte-Mère-Eglise.  In 1984, the signed charter established the relationship between the 2 towns and permitted several exchanges.

–    Student Exchanges:  Initiated by Monica STOY, a student exchange was made between the Sainte-Mère-Eglise Middle School and the Educational Council of Fairfax County, outside of Washington, DC.  The association was able to organize a week-long trip to the US for 15 students and 2 teachers in 2008.

Madame RENAUD passes away in 1988 but over the years, the AVA association will continue to exist and to develop in the same spirit and for the same cause for which she strived.